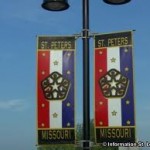 St. Peters is a city in St. Charles County, Missouri. The 2010 census showed the city’s population to be 52,575 tied for 10th with Blue Springs, Missouri.

Interstate 70 passes through the city, providing a major transportation link. In 2008 St. Peters was named the 60th best place to live by Money magazine, putting it at the top in the state of Missouri. It also ranked in Money magazine’s Top 100 in 2010 and 2012.

The “Rec-Plex” in St. Peters is an award-winning recreation and fitness complex that underwent an $18.5 million expansion in 2007. The city also hosts the county’s largest shopping center, Mid Rivers Mall. (Cited from Wikipedia)

St. Peters is home to many local events, festivals, and activities. It centrally located near entertainment, Mid Rivers Mall, and many parks along with it is home so several schools which make it very appealing to home buyers.