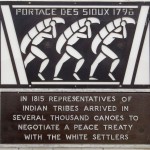 Portage Des Sioux is a city in St. Charles County, Missouri, United States. The town sits on the Mississippi River roughly opposite Elsah, Illinois. It is the home of the riverside shrine of Our Lady of the Rivers. The city was founded in 1799 by Spanish Lt. Gov. Zenon Trudeau and François Saucier in reaction to American plans to build a military post about twelve miles (19 km) downstream. The French name derives from the overland escape route between the Missouri River and Mississippi River used by a band of Sioux. While fleeing enemies; they used this area as a portage for their canoes, outdistancing their rivals who instead paddled all of the way to the confluence of the rivers.