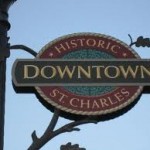 St. Charles is a city in and the county seat of St. Charles County, Missouri, United States. St. Charles is the 2nd largest city in St. Charles County. It lies just to the northwest of St. Louis, Missouri on the Missouri River, and, for a time, played a significant role in the United States’ westward expansion. It is the third oldest city west of the Mississippi. It was founded in 1765 as Les Petites Côtes, “The Little Hills”, by Louis Blanchette. Louis Blanchette was a French Canadian fur trader. It was also the last “civilized” stop for the Lewis and Clark Expedition in 1804. The city served as the first Missouri capital from 1821 to 1826. It is the site for the Saint Rose Philippine Duchesne shrine. It is also the home base for the St. Louis National Weather Service Forecast Office, serving central, east-central and northeastern Missouri, as well as west-central and southwest Illinois.

St. Charles offers many local events such as Music on Main, Festival of The Little Hills, art festivals, and many music festivals. Visitors come from all over to attend the local events as well as Ameristar Casino and Hotel.